I have usually found that this deck doesn’t provoke a lukewarm reaction. You either love it or hate it. Hot or cold. End of story. I personally love it and it is one of the most frequently used decks for my personal readings. I love the fact that the cards were painted with oils on canvas; the colours are incredibly rich and vibrant and there is a depth and solidity to the images that is rare. There’s something psychological here for me as an artist – these feel like the sort of images I would encounter in an art gallery rather than straightforward commercial illustrations. To me this is as much of an art tarot as it is a working deck which makes me feel good when I handle the cards.
by Christopher Butler

In the 1973 movie Live and Let Die (starring Roger Moore), a deck of tarot cards designed by Fergus Hall is used by Bond to seduce the beautiful virgin Solitaire (played by Jane Seymour). After Solitaire predicts ‘Death’, Bond makes sure that he predicts ‘Lovers’ by having Solitaire choose a card from a stacked deck of only ‘Lovers’ cards.

Oblivious to the Bond connection I picked up the Tarot of the Witches at a Charity store some years ago. Like so many spices in my pantry, it lay, along with some other decks, unused.

In his review on Aeclectic Tarot, Christopher Butler makes the point that people either love or hate this deck.  Many Tarot readers who are not impressed with the design of this deck, call it everything from ‘ugly’ to ‘ridiculous’, but some people do like the quite colorful and surrealistic design.

Initially I confess that I was not able to relate to the deck but since the world has been so seriously impacted by the Covid-19 pandemic I have been checking to see which decks support me as I, like everyone, is affected by the massive changes. Once I talked to the Tarot of the Witches I found that there was a shift in my attitude.

What support can you offer as we navigate this period of upheaval?

It came as no surprise when the Hanged Man emerged. This card helps confirms that this is a time to retreat to our homes. Everyone is in a state of suspension as we grapple with a threat that is likely to impact on us for a long time.

Generally the Hanged Man suggests that we are facing a situation we are not happy about and that we many feel as though we are stuck in a rut. Unless one lives in a bubble it is pretty obvious that no one is happy about the current situation.

However the Hanged Man also reminds us to be mindful of our attitudes. We do have the power to make choices and release ourselves from feeling as though we are stuck. This is not the time to make rash decisions or allow negativity to grip us. When we release negative beliefs new doorways are opened.

The Tarot of the Witches is willing to help me as I navigate this period and offer some suggestions about how to adapt and thrive as the world as I have known it changes.

How will you provoke me?

When I asked the Tarot of the Witches how she would provoke me the Valet of Coins made it clear that it would push me to concentrate, apply myself, study and reflect on how tarot actually works.

It is ironical that I decided to undertake a long term project working with the wisdom of tarot back in December 2019. I decided that it would be a ten year project. What I couldn’t have know was that with the opening of 2020 the world as I have known it would change. First we were confronted with the massive bushfires that devastated eastern Australia. It seemed that all of Australia was burning and the destruction was devastating.

When news of the Corona Virus first made headlines I, like so many others, dismissed it as just another flu infection. Little could any of us, other than epidemiologists, have known how this virus would spread and impact on every country in the world. Suddenly the words unprecedented, social distancing, social isolation and lockdown became everyday words and medical leaders who we had never heard of became household names.

As an introvert social distancing is not new for me. When my life was turned upside down over a decade again people who couldn’t cope with our drama distanced themselves. However, although I am familiar with this concept, I have found that the noise of what is happening has impacted on my capacity to concentrate and keep working on my planned project.

Having the Valet of Coins appear is just the ‘kick’ I need. I can make a contribution at this time. 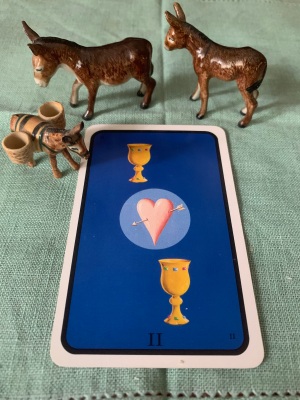 Who is it, in this deck, that I need to work with today?

According to Keen, when the Two of Coins (Pentacles) is in the present position, you are sailing along with so many projects and interests that you don’t have time to be miserable or look back on life with regrets. This is a great position for this card because it affirms the energy you are putting into non-traditional efforts is magically balancing with the demands of the real world on your time and money.

The Two of Coins (Pentacles) in the future position is a powerful card. It is the Tarot’s way of letting you know that the solutions to your situation are going to be arrived at by following your hunches and listening to your body. Trust your instincts and carry happiness with you instead of searching for it before setting out on the journey called life. This card in this position is the ultimate admonition to be yourself, to go for it.

Clearly the Tarot of Witches is happy to help me ‘go for it’. 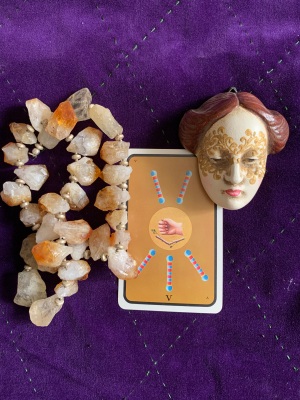 What is my role in our relationship?

The Five of Wands (Batons) is not always welcomed but my interpretation of this card is that we both have strong points of view. While we may not always be able to see eye to eye I am confident that we will be able to brainstorm, test ideas and engage in vigorous debate.

I cannot deny it! I do not always take the standard interpretation as an answer when a card like this appears. I have always been willing to push the inquiry of a group and to hear alternative points of view. I am willing to search for answers and I understand that while I may not like what this deck has to say in our relationship I am willing to engage in vigorous and spirited debate.

I believe that eliminating passion and emotion from decision making is not only nearly impossible; it’s counterproductive. At the end of the day, those feelings are the same ones that will drive the successful implementation of the team’s decision.

So if I have an intense reaction to something that the Tarot of Witches has to say I will count to five and have a close look at what she is saying to me.

What is the current state of your spirit?

The emergence of the Star is very encouraging. The Star is a very positive omen. It represents the period of calm and stability that follows the storm that is our current Tower state.

The Star emerging in response to my question about spirit tells me that the deck has a strong spirit and that she is preparing for new horizons which will embody a mix of the past and present. She is willing to pour her rejuvenating powers of inspiration onto me, bless my goals and help keep me motivated.