When you get the Magician in your reading, it might mean that it’s time to tap into your full potential without hesitation. It might be in your new job, new business venture, a new love or something else. It shows that the time to take action is now and any signs of holding back would mean missing the opportunity of becoming the best version of yourself. Certain choices will have to be made and these can bring great changes to come. Harness some of the Magician’s power to make the world that you desire most.
Source: Labyrinthos 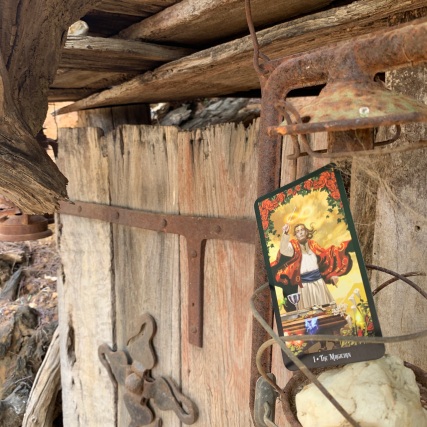 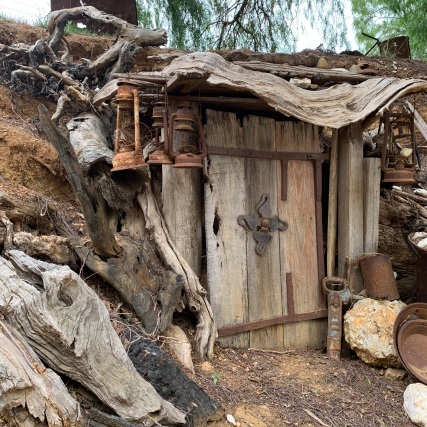 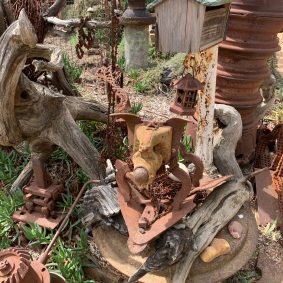 Whenever I visit the Antares Art Garden in Newstead I think of Manuel Torre, great artist of the Andalusian people, who said ‘This has much duende’. In Roger McKindley’s hands old hand-forged metal, broken glass, rusted machinery, rough sticks and local stones form intricate patterns and whimsical shapes that change with the light and the weather. When I am there I also think of the Magician. On a recent visit I drew the Magician card from a deck and placed it near one of McKindley’s installations. Antares has much Duende and is an example of an artistic magician at work.

In my search for the source of creative inspiration I was inspired to undertake a pilgrimage to Delphi, to gather the famed Castalian waters that romantic poets said were infused with creativity. Delphi, home to the Delphic Oracle is a magical place and I came back to Australia with small bottles filled with the precious water.

Having worked with so many people I do understand the artists desire to connect with the force, be it known as Duende, Manna, Taksu or Medicine Power.   I think of both the Magician and the Devil as intermediaries who inspire artists to open themselves up to and access the source of creative inspiration. It is the Magician and the Devil who are simultaneously allies of the shaman, poet, writer, dancer, or artist.

It was Frederick Lorca who helped me understand the link between these powerful archetypes. He captivated his audience when he set out to “convince them of the marvellous, artistic truth contained in the primitive Andalusian music known as deep song.” Lorca was terrified that the musical soul of the people was in great danger, “that the artistic treasure of an entire race was passing into oblivion”. 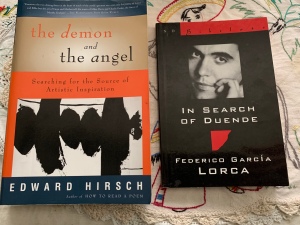 As the audience heard his voice, calling upon them to do something worthy, he must have appeared as a Magician, a powerful provocateur.

Similarly, when Ben Willis wrote, in The Tao of Art, about the ‘disreputable vagabond, a tattered tramp” who transformed when. he danced “suddenly, joyfully, spontaneously…. his arms floating lightly on the air to either side, his hands and fingers undulating expressively, his feet gliding surely and nimbly across the cobblestones, his body turning in parabolic, swirling, stately pirouettes to a measured inner rhythm only he could hear”  I knew he was describing a person filled with Duende. To all who watched this man must have seemed to have magical powers.

It is Keen who, when explaining the meaning of the Magician card says that “when the opportunity to use your best talents arises, your performance will seem like magic to those around you”. Certainly it has been my experience that “when you have a set of plans and enact them to perfection, quickly accomplishing your goal”, people are shocked. Accomplishments which  seem ordinary to you, as if they should have happened without question, will seem like magic to others.

The Magician card is the card of making things happen, being in control, getting what you want because you understand how to earn it … and impressing everyone in the process of doing what comes natural to you. If you are in doubt, read Understanding the Magician Archetype by Susanna Barlow and take a few moments to watch this video by Contemporary Tarot.

“The Duende’s arrival always means a radical change in forms. It brings to old planes unknown feelings of freshness, with the quality of something newly created, like a miracle and it produces an almost religious enthusiasm”
Frederico Garcia Lorca

Activities to Work With the Magician

1. The Light Seers Tarot site is quite magical. The entire deck, readings and activities are freely available. Check out the Light Seers Magician and take the time to dialogue with this magician.

2. The Soul Food Cafe provided a portal for artists and writers for over a decade between 2000 and 2010. It provided a safe haven where creativity flourished. The Soul Food Cafè aimed to promote creative pursuits as a daily practice. This site is intact in the WayBack Machine and you can sample some of the magical features, such as the Dig Tree or The Chocolate Box.

4. Engage with the Magician and, if you dare, let the Devil have a voice too. In her book ‘Modern Tarot’, Michelle Tea suggests that you can bring the Magician into your life by “making a magical altar to inspire and stir the unseen energies that are available to help you”. Here is a review of her book.